Intentions and Pretensions in Architectural Discourse

Recently, Design Intelligence retweeted an item from Archdaily.com: 150 Weird Words That Only Architects Use.

This tweet whisked me back in time 29 years to a somewhat similar piece I’d written for the RAIA Victorian Chapter newsletter. I don’t fully agree with the premise of the Archdaily article, which I’ll address separately.

I’ve found & exhumed that paper from its shallow grave, and resuscitated it. Here it is, again.

It is widely heard in architectural circles that architects do not express themselves well in writing. Indeed it is our own Chapter President’s most damning indictment: “Why, he is simply illiterate”, surpassing her second most outer banishment, “He’s inarticulate”.

My own view is that there is something mutually exclusive about the abilities to express oneself graphically and verbally: that design is a right-brained activity and writing is a left-brained activity (making allowance for those with heads big enough to accommodate developed forms of both). Hugh O’Neill differs sharply with this view, holding that if architects don’t write well it is because they weren’t trained to do so, and could if they had been.

Whatever the reason, it seems that many architects, especially those with a high “design” orientation, express themselves in rhetoric ranging from opaque in meaning to unnecessarily hifalutin. Editors of the popular press, even the popular architectural press, often receive proposed articles that defy belief. They ask: “but what does this really mean?”

Our purpose here is to look at some examples of the genre, and to promote the case for “professional plainspeak”. Various members of the ARCHITECT Editorial Board have provided their favourite bits of gobbledygook and codswallop for this article, as well as examples so erudite in conception as to be impossible for ordinary folk to get the drift of. It may well be that rubbish and erudite prose are the opposite ends of a spectrum, but I suspect they meet out there somewhere in space; at a sort of International date line of meaning. We leave it to you, dear readers, to decide which is which.

Our first contribution is about one of our favourite Melbournian architects, who on receiving the following rather (we thought) clearly stated draft from his script-writer, revised it to read as the second version below:

“When it comes down to basics, we’re simply here to provide a service to the community and in most cases, that service is much more about the needs of people than exotic design.”

“there is a necessary, reciprocal interactive balance of intention and trust in the relationship between architects and their clients.”

True enough, we would agree … but this was written for the common man …

Our second example of this genre comes from a recent catalogue entitled “New Classicism? – Ten Melbourne Architects”, produced by the Monash University Gallery, Department of Visual Arts. Here one of the ten describes what he is on about:

“It is intended that this work, by the process of representation, refers directly to formal sources which project a blunt demonstration of the modern condition, an unquestionable rationale, tactical superiority and savage disposition. There is great intrigue in the examination of this disposition, especially in relation to the utilization of power and fear as-devices, which are heavily reliant on formal annunciation for authoritative ends: intrigue in the precarious speculation on the unconfirmed, and in the spectre of the Incident.”

It is not far from that to a form which is in fact well composed and probably accurate, but which waxes rhapsodic to a point where we lose track of the story-line, being carried away with the … well, rather than get carried away myself … here is the example, from a recent copy of ARCHITECT:

“… our elders have passed through the same initiation and perpetrated the same schizophrenic tendency to dart amongst the stars heading off any rigorous personal development that might be challenged; falling back on bravado and publicity know-how or coveted seclusion to keep one’s name, rather than one’s architecture, alive and well in the outside world.”

“An unlikely combination of diverse and distinctive personal styles, a lack of consensus, loud-mouths, bad-mouths, heroes who exist for one magazine issue, silent unnoticed achievers, and an unspoken agreement to disagree on common tendencies amongst architectural designers in Melbourne forges an exciting and wavering development. To bolster this tendency, one negates a lineage of past employers and a tradition of eclecticism, and if someone does point all this out, you must repudiate it, ignore it and dismiss the audacity of the interjector with pouting lips and mumbled rhetoric of questionable grammatical construction. ”

When architects move into philosophy, especially about design, they often need to create particular definitions for words, to reduce confusion when speaking in the abstract. One of the best examples I know of this form is a highly regarded book entitled “Intentions in Architecture” by the Norwegian architect Christian Norberg-Schulz. Here is a sample paragraph (yes, just one paragraph):

Our next contribution is perhaps germane to the topic; a representative bit from a 1981 TRANSITION editorial the point of which was to help us understand what Peter Corrigan had meant in an earlier issue.

“There is in Corrigan’s assertion a certain message, its ‘reality’ – or the meaning that he intends it to have – but this meaning resides not in the statement itself but in the statement being said and heard (or read), that is: in its performance. All the key words are just pointers that direct attention to pertinent issues (he certainly sees them to be pertinent, otherwise, why bother?) such as symbolism, context, reflection, and analysis. But his choice and hence the definition – the basis for selection – of each word is meant to be seen as being relatively unimportant. Neither is the construction, the internal relations of the statement, to be regarded as being indicative of the connections between the issues to which attention has been directed. It is for the audience to discern those. Instead the construction of the statement is a separate theme. It develops independently of the situation it appears to describe, making a nonsense of that but ensuring that the symmetry of its own form is uncompromised.”

Our final offering is from a number of essays written by University architecture and history students, and proves that treading the narrow catwalk of good intentions starts early in our profession. What shall we have to say to these future architects? (Errors in the text are retained from the original.)

“Other ideals displayed in his work was his belief that each building should provide a sense of place by being constructed of local readily available materials, formed by a group of craftsmen working in unison, but allowing their individual style to become intergrated into the building. This view conveys Pugin’s strong sense of nationality and understanding of the individual forms of nature.”

“Unfortunately however, Straight Revivalism, whilst often meaningful, in the absence of scholarly copy, lacks the double coding, notably that higher level coding essential to the continuous appeal of that architecture as creative or artistic.”

“The Palladian arch that is so obviously stuck onto the front of the house finds itself utilized spatially at the top of the back of the house, the false chimney of the front elevation having solidified to windows at either side, and an arched window at the rear that echoes the decoration on the front.”

“This is one of the earlier Nursing Homes and when opened the waiting list was reduced almost to nil. But because of the quality of care, residents are not dying as planned and consequently the waiting list is as long as ever.”

Those of you who have suffered through his pastiche of blather and over-the-top erudition deserve some dessert, and we have two wonderful selections. The first comes from Steve Ashton, via a March 1986 letter to the Editors of TRANSITION, as follows:

A small question has been forming in my mind as I loyally plough through the pages of TRANSITION’s variegated criticisms and expositions. The question is, how does TRANSITION so consistently produce articles, apparently written in English, which require so much reader effort in unlocking what may or may not be interesting ideas about architecture?

After much study of these articles, the technique finally started to dawn on me. There must be a way of assembling attractive phrases of erudite appearance in such a manner as to negate any sense in the finished article. Well, there is. The secret is out, I’m afraid. I present for the elucidation of your readers, the TRANSITION Editorial Writer.

The technique is disarmingly simple. One takes one phrase from each of the modules A, B, C and D in that order and thereby assembles a sentence. Any phrase from an individual module can be used in association with any phase from succeeding modules. The technique is then repeated to form the next sentence, and so on until the editorial space allocation is filled.

The example below will demonstrate the technique:

‘According to Tafuri, an ethically unquestionable orthodoxy remains committed to, but not subjugated by, a common architectonic language. On the other hand, the apotheosis of machine civilization offers the sole means for the reinstitution of an efficacious social programme. Thus the concept of the machine as a profane revelation remains occluded in an unselfconscious theory of a totalitarian dystopia.’

This technique is particularly suitable for modern PC based word processing software, although for really serious academic work use of a mainframe is recommended.

I hope this will save your readers time, and perhaps encourage them to make their own contribution to this magazine. 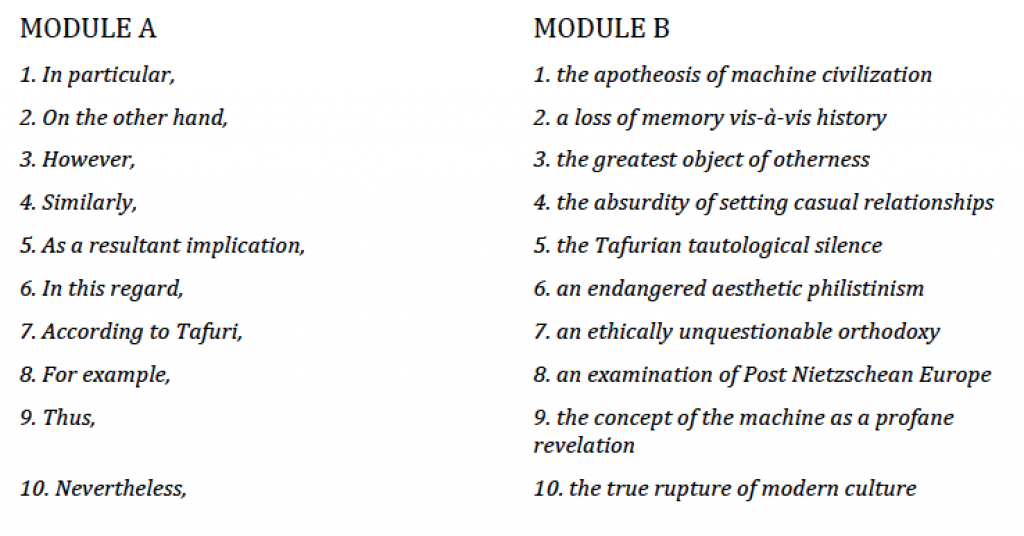 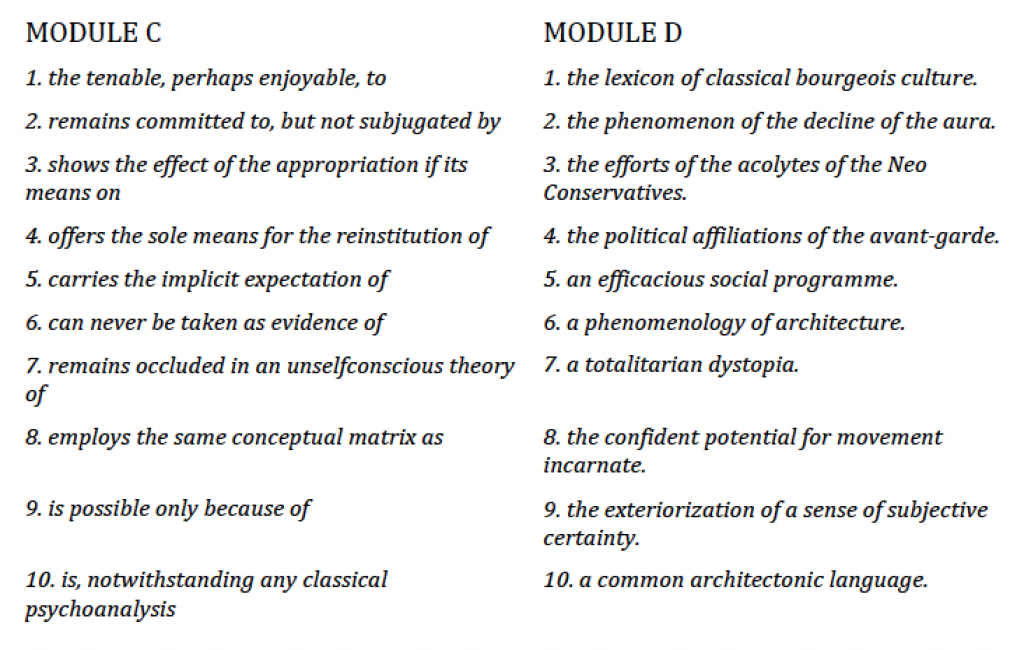 The second lolly was sent to me recently by Sarah Abramson, my former secretary in Boston; we are indebted to her and to the unknown Broughton for this handy guide: 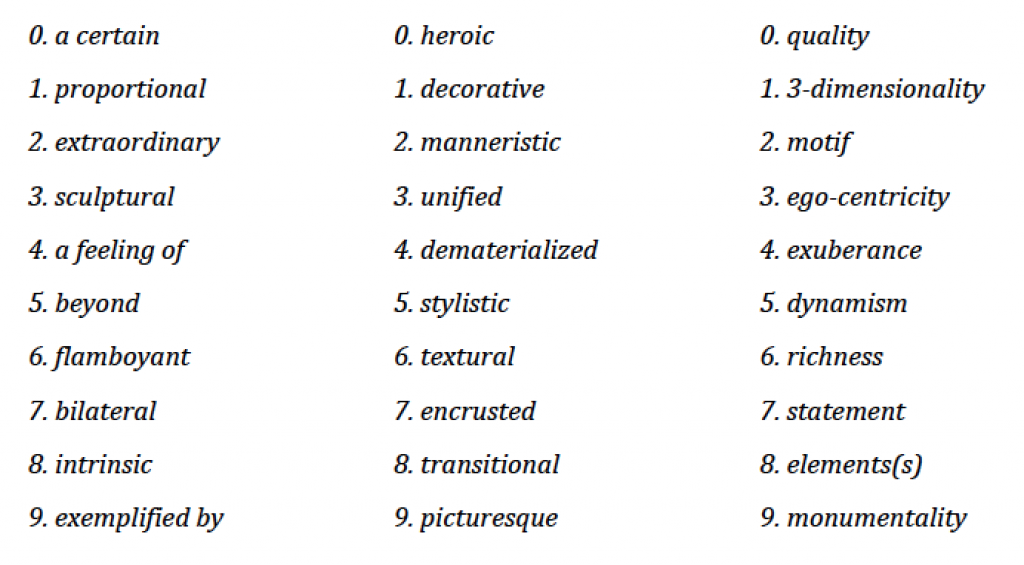 To play is wonderfully simple. Pick a three-digit number – one from each column. Drop the resulting phrase anywhere “No one will have the remotest idea what you’re talking about,” says Broughton. “But no one will admit it.”