Do Others See a Crisis?

Davy & Harris’s view of our reality

“Both the existing business model and many of the practices and technologies of architecture and engineering firms are relatively mature, and ripe for overthrow by new, disruptive technologies wielded by outside competitors. Architecture and engineering firms need to reinvent themselves and the way they work before they inevitably fall victim to this threat.

“These professions remain largely unchanged from the way they were defined and shaped during the last 75 years of the last century. In the past quarter-century, rapid social and technological change has widened the gap between societal needs and desires and professional values, ethics, practices, and capacities. Professionals have remained in place while clients and society have moved forward.”

Davy and Harris anticipated “overthrow by new, disruptive technologies”. Cliff Moser, one of the early proponents of Lean Design, turns this around, suggesting that future designers will have to be those disrupters, in his 2014 book Architecture 3.0: The Disruptive Design Practice Handbook.

“The recession has punished everyone, but for architects it has been especially hard. We experienced … a complete removal of markets. This was not a nuanced disruption or improvement of practice, but destruction so total that it sought to make the profession redundant. As incumbents, we were unprepared. Therefore we found that our profession was no longer needed. As a result, our business model was destroyed.”

Moser does not blame the recession for this destruction, but rather sees, as forecast by Davy & Harris a decade earlier, that the profession brought these problems on itself. The recession was a catalyst that amplified a change that was already in motion.

Rory Hyde, in his interesting 2012 book Future Practice: Conversations from the Edge of Architecture, suggests in his Introduction that over the past 7 decades we’ve been unwittingly complicit in our own marginalization:

“The post-war period in the Western world saw architects are leading the way, enacting their theories for a better society on an unprecedented scale, shaping the world for the better. Or so we thought. Our vision is for a clean, bright and optimistic future turned out to be anything but. Despite our best intentions, the very urban plans we laid out, and buildings we erected in the name of progress, proved to be our downfall.

“The socially motivated urban developments of post war period came to represent poverty, social conflict, crime and depravity, leading many of them to be demolished just to try and repair the damage they supposedly caused. This crisis of architecture’s responsibility for society saw the seeds for our marginalised position of today. Could we ever be trusted to enact change on such a grand scale again? The 1980s and 1990s saw architects sheepishly retreat to the self-imposed exile of the drawing board, creating ever more abstract and autonomous visions, but not for society, for each other.

“This period also saw the rise of private development and the decline of public works departments, leading architects to follow the money into the commercial sector.”

Maybe true, but maybe it’s both more complex, and also simpler, than that. Schools of architecture (in my view) have traditionally gloried “design” as something pure and uncompromising, whereas reality is inevitably about compromise.

Dana Cuff, in her classic 1991 work Architecture: The Story of Practice, observes: “… architects are not always able to see how their own actions may create undesirable consequences for their work. Long-standing and perhaps obsolete beliefs go unchallenged.” (p 22-23). Cuff says:

I agree with Cuff: My own recent work in issues of risk management strongly suggests that less than 1% of practising architects have any real interest in thinking about mitigating risk in their projects. They give lip service to the idea, but it pretty much ends there. “Let’s get the job first, then figure out how to do it” seems to be the prevailing attitude. Professional indemnity insurers have confirmed this trend, if not the percentage.

James Cramer and Scott Simpson, in their thought-provoking 2006 work the Next Architect: A New Twist on the Future of Design, say in their preface:

“It’s clear that the design and construction industry is on the cusp of enormous changes. … Design itself is being re-designed. “

There are other theories as well: Thomas Fisher, in his superb book In the Scheme of Things: Alternative Thinking in the Practice of Architecture, identifies three causes (which really need to be read in context to fully be appreciated): (1) we de-emphasise written and verbal communication, (2) the “romantic rebellion” of postmodernism, where design is seen as a personal exploration, impervious to evaluation, which leads to (3) thinking of ourselves as competitors, which he says is “more characteristic of a trade than a profession“. (p 29-30) 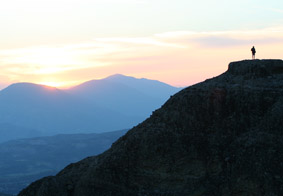 Can you actually rethink everything?

Yes, but not everything all at once. As soon as you start to rethink, and then change, any aspect of your approach to practice, it will have a ripple effect across everything else that you do.

Sometimes it won’t be a ripple, it will be a tidal wave, as the need to make significant change becomes more apparent.